How is winter not over yet, guys? (Actually, I feel a bit disingenuous writing this post today, since it is sunny and 40-something and you can actually see patches of grass through the snow in the backyard, but! While I'm enjoying this temporary reprieve, I know that we're not done with winter yet. Yet. Ugh. Anyway.) The novelty of playing in the snow & hot chocolate & soup in the crockpot & cuddling under electric blankets has worn off. I want to have playdates at parks again. I want to be able to run outside instead of doing eight million v-steps to workout videos in my living room. 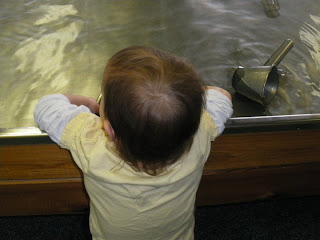 ...but since winter, much like my toddler, doesn't listen to a thing I say, we've been doing our best to stay active and combat cabin fever. This weekend's activity was a trip to the Impression 5 Science Center in Lansing. Museums for kids seem to be a kind of hit or miss (I've been to some awesome ones ((COSI)) and some . . . less awesome ones that I won't bother naming here.) At any rate, this was our first trip to Impression 5, and it was a hit! 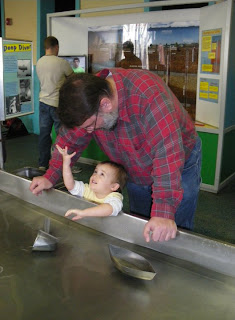 Our first stop was at the big water table, where K explained . . . something very important to Bob. (Actually, that's another lie. Our first stop was the Bubble Room, which K loved! Alas, I hadn't broken out the camera yet.) 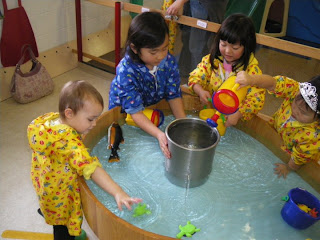 Then we moved on to the First Impressions room, which is aimed at babies up to 4 year olds. While K had a ton of fun playing around with the "big kid" exhibits in the rest of the museum, she could have happily stayed in this room the whole time. There was a shorter water table, a slide (good lord, that girl loves slides and they're hard to come by in the winter), and several other areas for creative play that we didn't have time to explore. The center provided raincoats and Crocs, so clothes/shoes/socks didn't end up soaked. 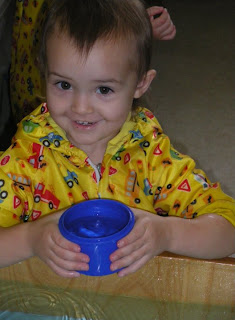 We made a stop in a giant heart (stay with me) where K ran through it the wrong way (there's a picture of that, too, but blogger is giving me a heck of a time with the picture arrangement in this post, so -- just imagine a crazed toddler zooming through the right atrium in the wrong direction. You can picture that, right?) 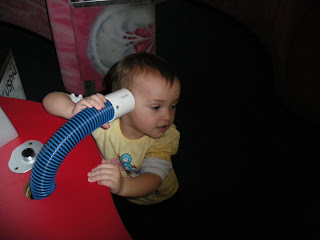 She listened intently to something! 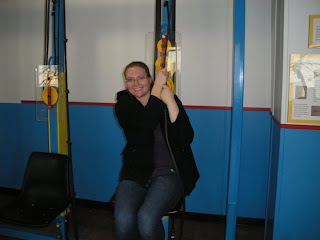 Next up was the Simple Machines room. Time for a mom picture! This was where you hoisted yourself up via pulleys. I am strong. Like Bull. 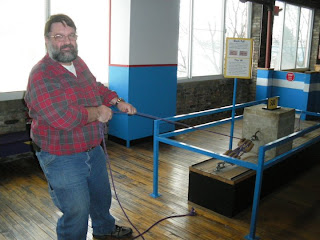 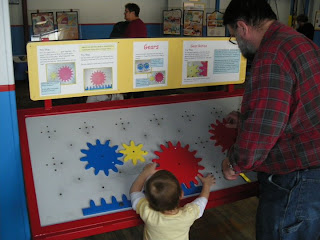 Gears, gears. Bob and K found this part of the museum much more interesting than I did. (Because I'm a girl and just want to look at rainbows and ride unicorns all day.) ((KIDDING, Kidding.)) (((But seriously, this part didn't do a lot for me because as many times as Bob tried to get me excited about the gyroscope, I just... I can't.))) Side note: it's free-form punctuation day here on the blog, folks. 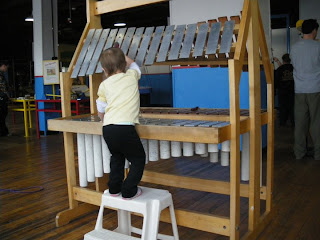 The music room, on the other hand, was more my speed. (And at this point in the adventure, "my speed" was "something that will keep K busy while I sit on this bench.") She loved the xylophone! 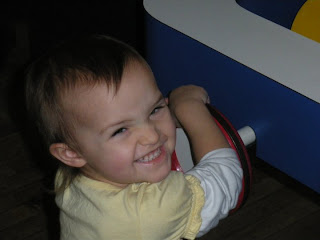 This was in the simple machines room, too. She's cute though, right? 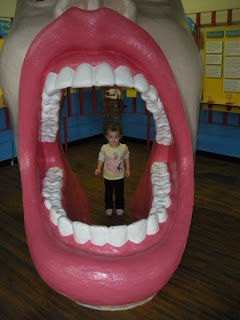 Oh, heck. I'm officially throwing in the towel on the "get the pictures in order" front. Here is K inside a giant mouth, which she was a little terrified of, to be honest, but I wanted a picture and goaded her into standing in it because I put my needs in front of those of my child. Or, um, I mean I didn't want to deprive her of what was surely a character-building experience. 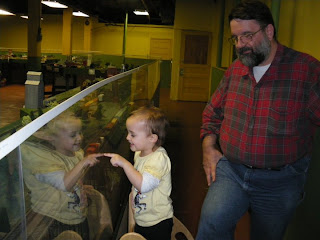 There was a special model train exhibit in the basement of the museum, which was another hit with both of the kids ;-) While this was one part of the museum with a no-touching rule, they did have a nice little area set up with a set of tracks the kids could play with, and a coloring area (though they were out of the train coloring sheets by the time we got there, I think). K is quite the little engineer!

It was a fun something-to-do and it got us out of the house, and K was exposed to some new things (both scientific concepts and germs, probably, because despite my desperate "don't put your mouth on that!" cries, you know she did). They actually offer a series of science classes for toddlers (neat!) and I think we're going to give that a try (you know how I feel about hauling K all over the state for "enrichment activities"!)

What adventures have you gone on lately to combat cabin fever?

Edit: There is actually a great deal on a "Family Four Pack" admission to Impression 5 through Groupon going on today! Check the Lansing deal if you're interested.
Posted by Unlikely Origins at 11:00 AM

Promote Your Page Too

This Blog is PR Friendly!